St. Mary of the Fields Shrine 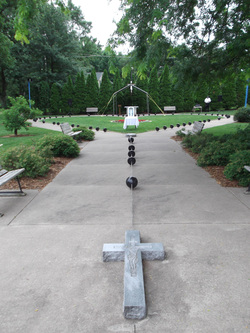 Traditionally, a rosary is a string of beads for counting prayers. The “Rolle Bolle” Rosary beckons visitors to count bowling balls and rolle bolles on a pathway of prayers. Stretching 106 feet by 65 feet this pathway symbolizes the Immaculate Heart of Mary. Blessed on August 16, 1992, this unique feature of the Shrine has rekindles a passion for prayer.

Memorial for the Unborn 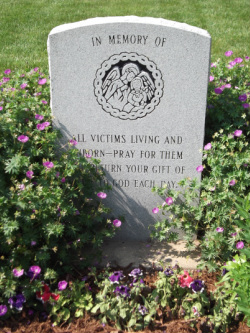 With up to 4,000 abortions daily in the United States, St. Mary of the Fields Shrine has created a memorial for unborn victims of abortion. Donated by a member of the Knights of Columbus, this simple monument reminds us to combat the culture of death and to pray for all victims of abortion: the unborn children and their mothers.

Grotto of Our Lady of Fatima 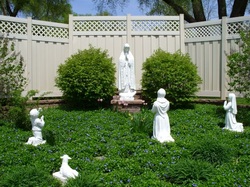 A recent addition to the Shrine is the Grotto of Our Lady of Fatima. The grotto represents the mystical events of 1917 in Fatima, Portugal. There Our Lady appeared to three shepherd children over several months with the last apparition on October 13th. It was on that date that the sun began to spiral towards close to 70,000 people. The miracle was seen over a 600 square mile area and was reported on by the secular press of the day throughout Europe.

The three children were allowed to see Heaven, Hell, and Purgatory and were asked to pray the Rosary for sinners. They were also asked by Our Lady to have others pray for sinners as well. The children were given three secrets; the third of which was released in 2000 upon the beatification of two of the children: Jacinta and Francisco. The third child, Sr. Lucia died on February 13, 2005 at the age of 97.

This famous Third Secret of Fatima dealt with a scene of a bishop in white being slain but coming back to life. The only bishop in white is our Holy Father, the Pope. Pope John Paul II was almost assassinated in 1981 but was protected by Our Lady’s hand. The bullet has been placed in the crown of the statue of Our Lady of Fatima in Fatima, Portugal. The revelation of the third secret marked the creation of a special tribute to Our Lady of Fatima which was blessed on June 10, 2001. 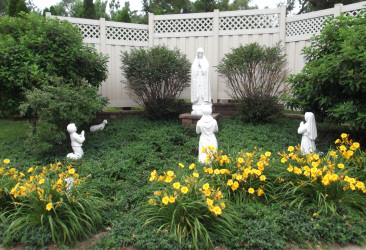 Surrounding the Grotto of Our Lady of Fatima is Mary’s Garden. Various plants and flowers have been named after different titles of the Blessed Virgin, Our Lady. Mary predicted in St. Luke’s Gospel that all generations would call her Blessed and so Catholic Christians remember her contribution to our salvation when she said “yes” to God the Father to carry Jesus, His Son, Our Savior.